We have reported on our ongoing work with management related to workload, EDI and casualisation in previous newsletters, so we concentrate here on USS.

We welcome the University’s continuing willingness to discuss these issues with the branch. This has led to a several important developments. Firstly, we are pleased that the University continues to recognise that the current USS valuation is excessively prudent and that, as a result, the cuts to our pensions we are being asked to accept are unnecessary. Secondly, we are also pleased that the University has called for a new evidence-based, moderately prudent valuation to supersede the existing flawed valuation.

Making such a call was one of the two demands that UCU made of employers in the current dispute. Finally, we very much welcome the University’s acceptance that UUK should provide the same level of covenant support to all proposals considered at the Joint Negotiating Committee (JNC). UUK’s refusal to do this in August, with the consequence that UCU’s proposals could not be considered, is a direct cause of the industrial action scheduled.

However, we are disappointed that the University is not willing to call for the current UUK proposals to be withdrawn, the second of the two demands in UCU’s dispute letter. The rationale given by the Vice Chancellor – this would mean that we would be on a path to crippling contribution increases – is unjustified for at least two reasons. The first is that it ignores the fact that employers’ actions put staff on a path to crippling pension cuts. Essentially the Vice Chancellor’s argument is that the costs associated with the flawed 2020 valuation are so crippling that the University cannot risk being exposed to a share of them, so staff must be exposed to almost 100% of these costs instead. This is simply not fair. The second reason is (as explained here) withdrawing the UUK proposals would not involve significant contribution rises until October 2022. This would create enough space to find a negotiated settlement without the need for industrial action. Such a settlement would prevent the unaffordable increases scheduled for that date.

To be clear, the forthcoming industrial action would not be necessary if employers were willing to (i) call for a new evidence-based, moderately prudent valuation, and (ii) withdraw the current UUK proposals, and (iii) enter into good faith negotiations to find a fairer solution. We are very pleased that the University accepts (i) and (iii), but we are disappointed that it has chosen industrial action over calling for the withdrawal of the UUK proposals.

At the UCU delegates’ meeting on 12 November, the Branch representatives voted in line with the views expressed by Loughborough members at the EGM two days earlier: that is, in support of re-balloting universities that did not reach the 50% threshold, with industrial action to begin in the New Year.

The NEC met the following week and indeed decided to re-ballot those universities, but also to initiate strike action before the Christmas break. Therefore, failing a last-minute breakthrough in negotiations, we will be on strike on December 1-3 inclusive. We encourage you to let students know in advance if you will be taking part in strike action so as to maintain good relations and to avoid causing them undue inconvenience.

We are grateful to senior management for agreeing to delay pay deductions for December strike action until February, and for agreeing to maintain pension contributions during the action.

There will be in-person pickets on campus each day. We will meet at the main University entrance at 8:00 am and picket until approximately 11 o’clock. There will be a BBQ on Friday. 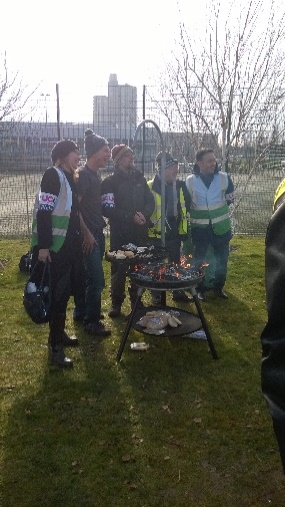 To keep members safe, hand sanitiser will be provided as required on picket lines, social distancing will be observed, a list of participants for contact tracing purposes will be kept, and members intending to join the picket are asked to take a lateral flow test before participating.

Members who do not wish to use public transport to attend a picket might consider offering or taking part in virtual forms of action, such as organising a teach-in or using social media to distribute fliers and messages.

If you can support the action by joining a picket, offering a virtual event, or helping to advertise the action, please contact Marc Gibson.

Out of Office Message

Below is a suggested out-of-office message for you to use during the period of industrial action. Of course, please feel free to adapt as you see fit:

I am currently unavailable as I am taking part in the University and College Union’s (UCU) strike action to defend our right to a fair pension. Please redirect your query to the University management, asking them to use their leverage to help secure a return to negotiations.

Some of our members will be supporting Leicester colleagues to GTVO in their re-ballot on USS. If you can’t travel to join the Loughborough picket line, but live in Leicester, please consider visiting their picket lines: they propose an 8:30 am start, with each day ending with a rally and march at 11am.

LUCU Health and Safety officers undertook a programme of health and safety inspections in one School (as per Regulation 5 of the 1977 Safety Representatives and Safety Committee Regulations), following multiple reports from members in three subject areas who reported excessive workloads and work-related stressors that were having a detrimental impact on their physical and mental wellbeing.

The inspection took place between 26 October and 19 November. Four meetings chaired by a LUCU H&S officer enabled participants (both members and non-members in the School) to feed back on their work experience in terms of Demands (workload, work patterns and environment); Control (how much say they have over how they work); Support (resources provided both centrally by the University and by line management); and Change (how changes are managed and communicated). This was followed up by a survey. In total, we captured feedback from 66 staff.

The data collected revealed significant stress hazards, and a discursive analysis of responses, along with the survey results, was submitted to HR, with a request that management urgently develop an action plan to address the problems (with deadlines for reaching interim targets, as well as long term improvements). We are pleased to report that the University recognizes the validity of concerns about staff wellbeing in the School, and a meeting is scheduled between HR and the School’s SMT to start formulating an action plan. We will continue to monitor the situation through our reps, as well as through consultation with management about progress on the action plan.

We would like to welcome two new reps. Saul Albert, who lectures on social psychology in Social Sciences and Humanities, is our new rep in Communications and Media. Tony Sutton, who is a University Teacher in Wolfson, will now be representing members in Mechanical Engineering. Saul succeeds Dominic Wring, while Tony is taking over from Kaddour Bouazza-Marouf. The Branch Committee would like to thank Dom and Kaddour for their many years of excellent service to members in their areas.

LUCU reps serve as essential ‘on the ground’ points of contact for members. If you might be interested in serving as a rep for your area and would like to know more about what the role entails, we encourage you to talk to our Membership Secretary Marie Hanlon.